Many writers who joined Twitter after Emma Lombard (in my case in 2019), have learnt a lot from her. Not just about how to Twitter as a writer, but also from her blog posts and the example she’s set in areas like developing your author platform as an unpublished author. But Emma is no longer unpublished. I’m excited to say that her debut novel, historical fiction Discerning Grace (book 1) is out now, and to be posting this interview with Emma about it.

What inspired you to write DISCERNING GRACE?

I’ve always been a little nosy—I know, I know … curiosity killed the cat! But back in 2001 during one of my regular letter-writing sessions to my grandmother in England, I decided I’d like to know a little more about our family history from the older generation. Once they’ve passed it’s so hard to find out what kinds of people they knew and the sorts of things they got up to.

So, my darling late grandmother, whom I was incredibly close to, indulgently began answering my questions and documenting memories of her own childhood and stories of ancestors. All it took was for me to read the opening to one of her letters and I just KNEW I had to write a story about it! This is what the letter said, ‘Your GGG grandmother was only 16 when she ran away from home to marry a sea captain … her family cut her off and she sailed the seas with him …’

Come on! What author couldn’t resist a little bit of real-life inspiration like that?

And so, that is how my purely fictional, historical naval adventure— with a dash of romance—blossomed. I’ve been thrilled by the journey of writing it and all the research too, but most of all, I’ve loved imagining the incredible courage and fortitude it would have taken my ancestor to choose such a life! Plus, there is my GGG grandfather’s side of the tale to consider too. As my grandmother put it, they were ‘obviously a very enlightened couple, and she a very, very liberated woman.’ 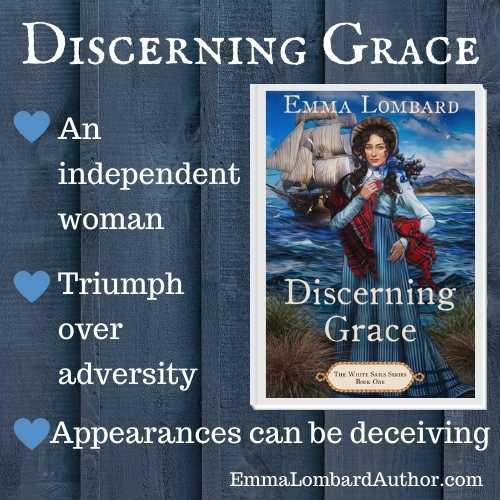 What was the best piece of writing advice you received when starting out?

To give my main character, Grace Baxter, more agency instead of her being a victim of circumstance. I was pushed to get her to create and direct her own circumstances. This was a bit more of a challenge having a female lead character in the early 1800s because of societal restrictions on women in those days. But I also figured that there had to be pioneering women, even back then, who broke the mould. Since Grace is inspired by my three times great grandmother, who indeed bucked the norm in her day by leaving her well-to-do family in England to elope with an English sea captain and live with him at sea, I felt I had a little more leeway to play with when writing Grace’s character. And besides, what’s a rollicking romantic adventure without a feisty heroine!

I’m open when it comes to reading historical fiction through the different eras, from Jean M. Auel’s prehistoric The Clan of the Cave Bear, to Vikings and Romans, through to later centuries like in Wilbur Smith’s Courtney series. As for writing it, I’ve been so immersed in the 19th century since I’ve been writing my own books, that I have a soft spot for this era. There’s a great balance of knowledge and information out there since it wasn’t too long ago—say unlike the ancient Egyptian era. I have huge admiration for historical authors who write about ancient times. The research required for that is mammoth (snigger)!

While there are many well-known historical females, my research unearthed a whole world of unknown women whose stories have not had a spotlight shone on them. These have been my favourite historical females to find—mothers penning journals about parenthood, sisters writing letters to relatives from the other side of the world, wives aboard ships keeping diaries that recorded tiny details of daily life not captured in a ship’s log books. It took me ages to find some resources that spoke about women aboard ships who were not just there to entertain the sailors, but who played a pivotal role in sailing the ship, raising a family aboard, and supporting industrious endeavours. These are some of my favourites:

What message are you sharing in your books?

The themes in my first novel, DISCERNING GRACE (Book 1), include:

Does each book stand alone, or are you building a body of work with connections or themes between each book?

I love reading a long series where you can immerse yourself into another world and get to know the characters intimately through several books, so it felt perfectly natural for me to write a series too. It has been a joy to evolve my characters from their young and naïve selves in the first book, and mature them through their life experiences in subsequent books. Discerning Grace (Book 1) is out now. The second book is nearly ready to publish, and I have complete draft manuscripts for books three and four.

A movie producer wants to turn your book into a movie and you get to make a cameo. What would you do in the movie?

Ooo, isn’t this every writer’s dream!

Due to the nature of my story aboard a 19th century Royal Naval tall ship, there aren’t that many female characters, though I could play no role on the ship since I get hideously sea sick!

I would have to stick with a role that is safe on land, so perhaps one of the dinner guests in my opening scene.

You have created images for your main characters, how does that help you write them?

I asked my beta readers to send me images of real-life people who they thought most looked like Seamus and Grace. Those images, along with the descriptions from my book, created the basis for the artwork I’ve commissioned (because I can barely draw a stick man!) They turned out exactly as I envisaged them in my mind’s eye!

It has been marvellous to have them drawn so young and fresh when we first meet them. For the subsequent books in the series, I can envisage the deepening of Seamus’s smile line beside his mouth, or the crow’s feet around Grace’s aquamarine eyes. I don’t necessarily speak to my characters, but I do sit and watch them interact and play out scenes in my head (it must look like I’m staring into space, and not working, when I do this!) I only need to look at their body language in their artwork for an inspirational reminder about how they react physically and verbally to different situations.

Since I own this artwork, I’ve actually created my own Redbubble store called, By-the-Book (yes, like the name of my newsletter), where my readers can grab their own favourite keepsakes.

What do you do for fun? What does a perfect day look like?

In everyday life, I’m Mum to four teenage sons—my men children, all of whom are taller than me—and two cantankerous cats who often thrash it out for a spot on my lap! I live in the perpetually sunny city of Brisbane in Australia. I love building jigsaw puzzles (especially Wasgij, backwards puzzles), playing Candy Crush (my secret shame!), and playing board games with my boys—though gone are the days when used to I beat them, they whip me soundly now. And I totally suck at Risk! Having raised four rambunctious boys, my perfect day these days constitutes solitude and silence. It doesn’t matter where, as long as those two ingredients are present.

Emma Lombard was born in Pontefract in the UK. She grew up in Africa—calling Zimbabwe and South Africa home for a few years—before finally settling in Brisbane Australia, and raising four boys. Before she started writing historical fiction, she was a freelance editor in the corporate world, which was definitely not half as exciting as writing rollicking romantic adventures. Her characters are fearless seafarers, even though in real life Emma gets disastrously sea sick. Discerning Grace, is the first book in The White Sails Series. 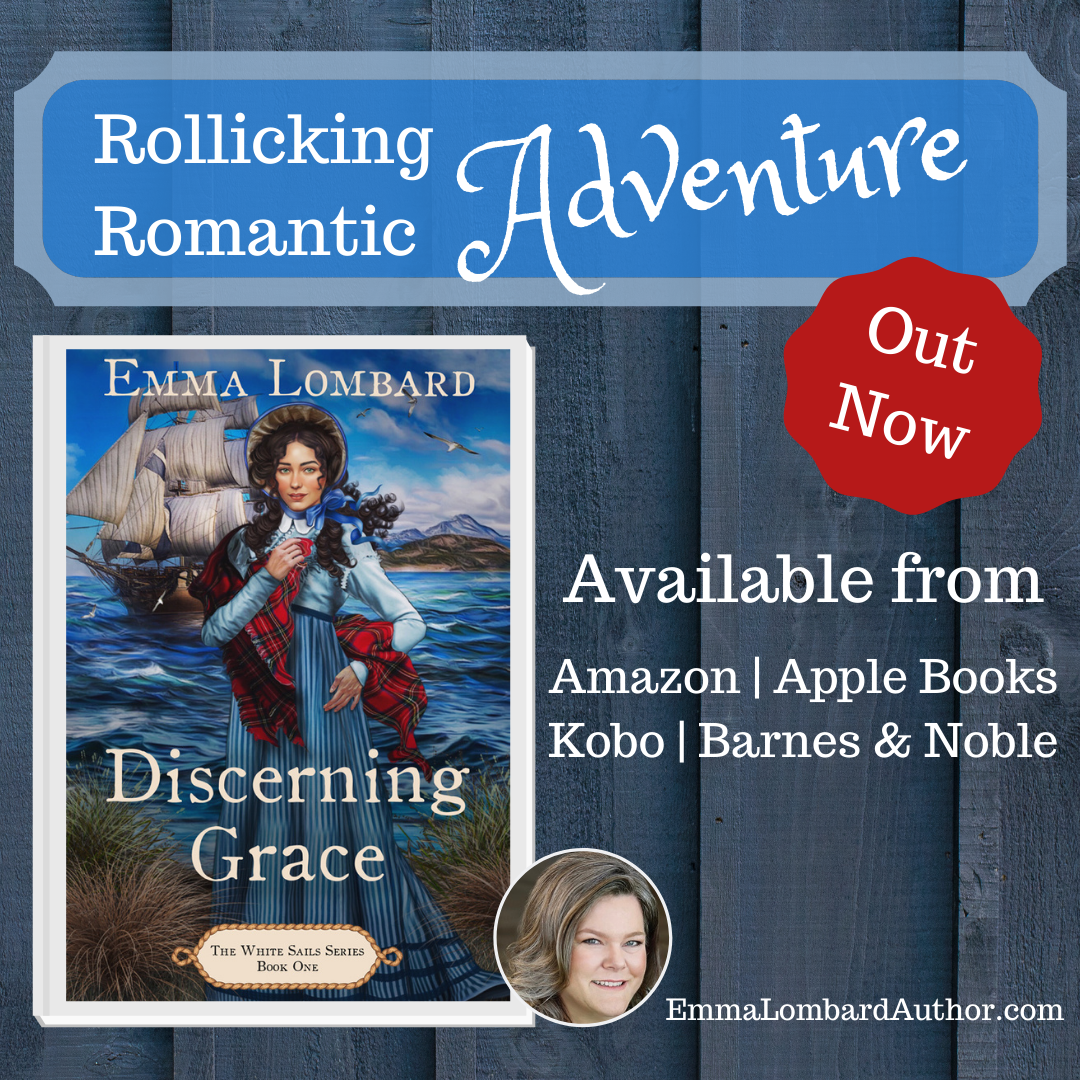 2 Replies to “An Interview with Emma Lombard”

This site uses Akismet to reduce spam. Learn how your comment data is processed.